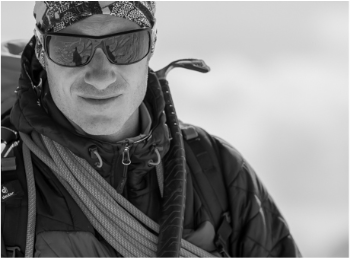 Frédéric SOUCHON has been a real mountain enthusiast from a very early age. High mountain guide, he also exercises with passion the wonderful profession of rescue worker in the heart of the Chamonix HMGP,  (High Mountain Gendarmerie Platoon). Exceptional playground, the region allows him to devote himself daily to his passions, whether that be mountaineering or gliding.

The mountain holds no secrets for them. They master it and exercise every day in the most wonderful that it has to offer but also in knowledge of its worst features.

At the HMGP, because every minute counts, the equipment must not be an obstacle, but rather an invaluable asset.

Frédéric Souchon, has chosen CimAlp for his personal equipment and recommends the brand to every fan of the mountains, whatever their level of practice and their goals.

The expeditions of Frédéric